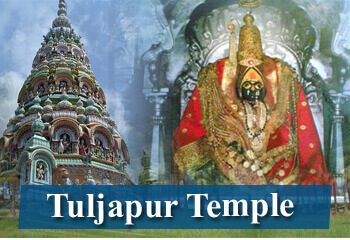 Pawar Travels Provides a Cab for Tuljapur Darshan. The Total kms from Pune To Tuljapur via Solapur is 250 ie 155.00 miles. The city of Solapur is the district headquarters.The Tourist places near Tuljapur are :

1. Tuljabhavani Mandir- This Temple is considered as the 51th Shakti Peethas in India Maharashtra.

2.Chintamani Temple- It is a Beautiful stone carved structure which is situated just outside the main Temple of Tuljabhavani .

3. Kallola Tirth- The Kallola tirth is Ranked 3rd out of 10 th places to visit in Tuljapur its a huge water tank which is located in the Prakara Mandir.

4. Gomukh Tirth- Gomukh Tirth is a beautiful place in Tuljapur City a awsome waterfall which ia about 6 feet in height.

5. Vishnu Tirth- it is a popular tourist attraction of tuljapur which has 3 entrance which are linked by stone steps.

Mutt was a devotee of Tuljabhavavi Devi.

The best season to visit Tuljapur Tourism is in the winter season, ie from november to feburary when the climate remains comfortable .Pawar travles arranges a tuljapur tour package with
manny places of attractions near by . Tuljapur city is located in the Osmanabad district in the Maharashtra state which is one of the Shakti peethas . This city was named after the last ruler osmana ali khan.

Giving a look towards the festivals, there are manny festivals which are celebrated amongst those are Diwali the festival of light then Navratri which is dedicated to Goddest Durga which occours twice every year. the festival of colors holi is celebrated in a very colourfull manner in tuljapur it is considered as one of the biggest colourfull festivals for thrnatives. there are various hotels and restaruants where you can relax for some time. The Languages known there are english hindi and marathi. Tuljapur is considered as the religious tourist destination. the temple is open from early morning 5am to night 9pm, this temple is good for nivarna seekers.